Which latching relay works with 120Vac 15a and momentary toggle switch

Howdy guys, hobbyist here and new to working with any voltage over 18v(Guitar mod). I want to replace the power toggle on my surge protector with “fighter pilot” style toggle switches, one regular and one momentary in series respectively, with a latching relay on the back end. I’ve been directed towards both dc and ac relays through the digi website so i was really hoping someone here could help me put an end to my research. All input is appreciated!

I need more information to make a good recommendation. One factor that can significantly reduce cost is if you need a true latching relay or if you can use a dual-pole relay wired to latch in the on state. Another is whether the momentary switch is SPST NO, NC, or SPDT.

Probably the best start would be for you to describe how you want the system to operate. Write out the steps you want to perform with the switches to turn on the power strip and also the sequence you want to have for turn off.

Here’s one example of an operating method that is easy to design and on the low cost side to build.

Great idea, I was too hasty when i wrote the post at work! I think i need true latching but i dont know enpugh to say if i need spdt or spst. I do believe normally open would be the best option so it always defaults to off. Right?
Links:
The surge protector is https://smile.amazon.com/gp/aw/d/B07W5MYBFJ?psc=1&ref=ppx_pop_mob_b_asin_image

Momenary toggle (toggle 2)
Cant upload third link. Its one under the other switch in the dropdown menu

The way i had planned it, if its possible, is to have the standard toggle(toggle 1) first and the momentary(toggle 2) second. Toggle 2 would control the latching relay to permanently start or permanently stop power to the strip, but it would only work with toggle 1 in the on position. Ideally, toggle 1 could be switched off without turning off the strip. I thought the switches in series would act as a neat kind of failsafe to keep me from accidentally switching off the whole system when unintended.

need true latching but i dont know enpugh to say if i need spdt or spst.

always defaults to off.

By design, latching relays don’t have a “default” state; they remain in whatever state they are until prompted to change.

The arrangement Paul describes would require 2 SPST switches (one momentary) and a DPST (or DPDT relay, using the N.O. contacts) and look something like the below. Switches and relay being rated for 120VAC or better all 'round. 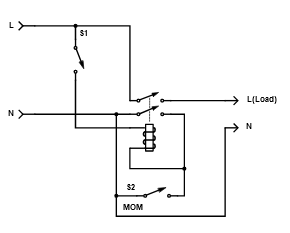 Likely relays for the task can be found here.

If you still like the flip-cover concept, the GT-4R is an option, with switches that should be mechanically compatible found here.

I’m sorry if I’m being a bit unclear or mis-wording things, I’m trying to learn while I can but my first solution was dangerous lol
I had planned for the switches would be remote from the strip, mounted on the front of my desk instead of on the strip behind my desk, so im not too worried about the extra space in the strip. The toggle switches are supposed to be off when closed, but i thought the way i planned it would work with that configuration. The momentary only ‘signal’ when flipped, and be off again when it springs back. That would trigger the relay to either turn on or off the power until prompted again. The first switch in series is supposed to either enable or disable the momentary toggle from triggering the relay, until the first toggle is in the on position, while being able to switch it to ‘off’ without affecting whichever power state the relay currently has the strip in.
So pretty much:
1.) The relay would control whether the surge protector is ‘on’ or ‘off’
2.) The momentary switch would trigger the relay to either start or stop power
3.) The first switch works independently of the power, does not start or stop power, just controls whether the second switch is able to trigger the relay (a safety so both switches have to be on, to prevent accidental switches from maybe a belt loop catching one switch but not the other)
I hope this setup is possible but I’m open to hearing similar alternatives that ill be able to use in other projects later as well. Thank you very much for your time and help!
Oh and as an afterthought, the momentary springs back to ‘off’ but i planned on keeping the first switch off as well, so I have to flip both to change power states. First to ‘engage’ the momentary, and then the momentary to toggle the relay. the momentary would be useless without the first switch ‘on’ hopefully

There is never enough extra room inside a modern plastic housing power strip for a relay large enough to handle the 15A of a typical power strip. You could look for a large expensive metal power strip with like a 4"x4" or larger end profile and hope it has enough room inside. The most common solution is to make an external housing and wire it to the power strip via a heavy gauge wire like this person did. 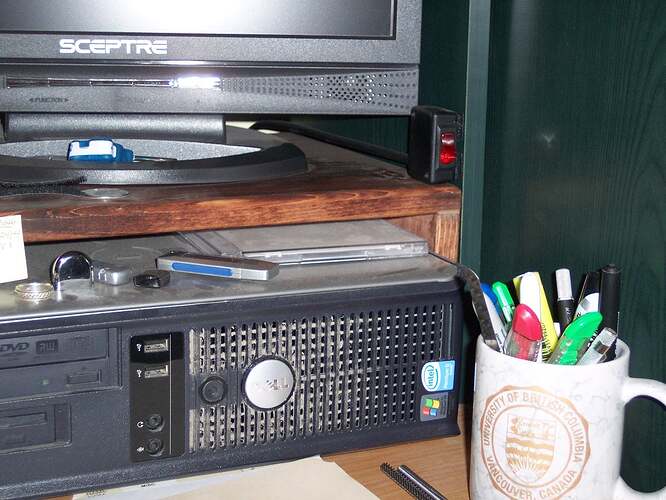 Make Your Own Remote Power Switches

Make Your Own Remote Power Switches: Most people know about standby power (i.e. that many electronic devices continue to consume some power even when they are turned off). One way to eliminate standby power is to use a power bar or surge protector...

To get the momentary switch to do both the on and off triggering you need a step relay instead of a latching relay. This one will do the job.

The data sheet is a bit lacking but I believe you would use the 240VAC wiring example for this 120VAC stepping relay. The diagram is for a DP unit and this is a SP unit so terminals 3 & 4 won’t be on this relay.

The hot line from the AC cord (black) goes to terminal 1 and terminal 2 goes to the power strips hot line. A neutral wire (white) needs to connect to terminal A2, and the momentary switch connects between A1 and the hot line.

YES!! I saw his video and that sparked my idea, I just had to go and make things complicated lol. Thank you so much Mr Hutch!! I think this will be exactly perfect! Do you have a paypal or anything? Id be more than happy with sending you a little thank you

Once you described the sequence it finally dinged in my brain that this will be a very fun way to switch the power. It would be especially cool with a gaming PC rig used for fighter pilot flight games. Pairing it with the same switches for the he PC power and fan control would be icing on the cake. I’m envisioning something that would look way cooler than my mechanical skills could build (I can do functional mechanics well, but suck at the cosmetics).

No payment desired, remembering step relays and finding they are still around was a very fun break from my current engineering project (reverse engineering a precision 1981 position sensor PCB assembly fixture).