Version 2.2: i2c_master.vhd (14.1 KB)
Corrected small SDA glitch at the end of the transaction (introduced in version 2.1)

Version 2.0: i2c_master_v2_0.vhd (13.5 KB)
Added ability to interface with different slaves in the same transaction
Corrected ack_error bug where ack_error went ‘Z’ instead of ‘1’ on error
Corrected timing of when ack_error signal clears

This details an I2C master component for single master buses, written in VHDL for use in CPLDs and FPGAs. The component reads from and writes to user logic over a parallel interface. It was designed using Quartus II, version 11.1. Resource requirements depend on the implementation. Figure 1 illustrates a typical example of the I2C master integrated into a system. A design incorporating this I2C master to create an SPI to I2C Bridge is available here.

The I2C-bus is a 2-wire, half-duplex data link invented and specified by Philips (now NXP). The two lines of the I2C-bus, SDA and SCL, are bi-directional and open-drain, pulled up by resistors. SCL is a Serial Clock line, and SDA is a Serial Data line. Devices on the bus pull a line to ground to send a logical zero and release a line (leave it floating) to send a logical one.

For more information, see the I2C specification attached below in the Additional Information section. It explains the protocol in detail, the electrical specifications, how to size the pull-up resistors, etc.

The I2C master uses the state machine depicted in Figure 2 to implement the I2C-bus protocol. Upon start-up, the component immediately enters the ready state. It waits in this state until the ena signal latches in a command. The start state generates the start condition on the I2C bus, and the command state communicates the address and rw command to the bus. The slv_ack1 state then captures and verifies the slave’s acknowledge. Depending on the rw command, the component then proceeds to either write data to the slave (wr state) or receive data from the slave (rd state). Once complete, the master captures and verifies the slave’s response (slv_ack2 state) if writing or issues its own response (mstr_ack state) if reading. If the ena signal latches in another command, the master immediately continues with another write (wr state) or read (rd state) if the command is the same as the previous command. If different than the previous command (i.e. a read following a write or a write following a read or a new slave address), then the master issues a repeated start (start state) as per the I2C specification. Once the master completes a read or write and the ena signal does not latch in a new command, the master generates the stop condition (stop state) and returns to the ready state. 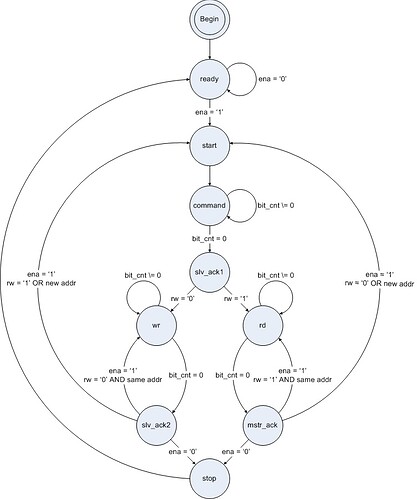 The timing for the state machine is derived from the GENERIC parameters input_clk and bus_clk, described in the “Setting the Serial Clock Speed” section below. A counter generates the data clock that runs the state machine, as well as scl itself. 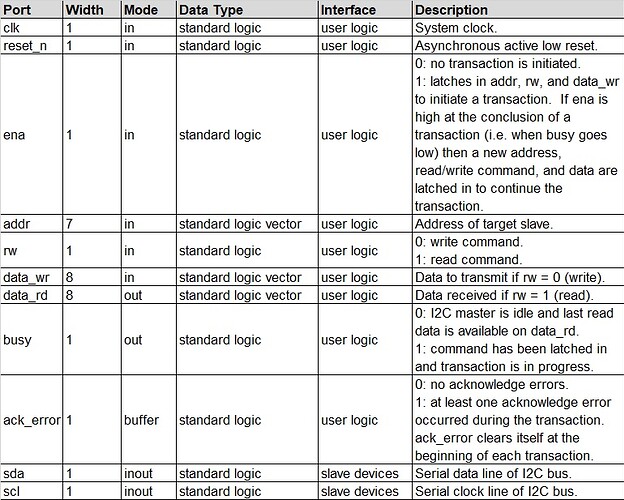 A low logic level on the busy output port indicates that the component is ready to accept a command. To initiate a transaction, the user logic places the desired slave address, rw command, and write data on the addr, rw, and data_wr ports, respectively, and asserts the ena signal. The command is not clocked in on the following system clock clk. Rather, the component is already generating the I2C timing internally, and clocks in the command based on that timing. Therefore, the user logic should wait for the busy signal to assert to identify when these inputs are latched into the I2C master.

The I2C master then executes the command. Once complete, it deasserts the busy signal to indicate that any data read is available on the data_rd port and any errors are flagged on the ack_error port.

Multiple reads and writes (and any combination thereof) may be executed during a transaction. If the ena signal is asserted at the completion of the current command, the I2C master latches in new values of addr, rw, and data_wr and immediately executes the new command. The busy signal still deasserts for one scl cycle to indicate that any read data is available on data_rd, and it reasserts to indicate that the new command is latched in and being executed.

To continue a transaction with a new command, the ena signal and new inputs must be present no later than the last data bit of the current command. Therefore, it is recommended to issue the new command as soon as the busy signal indicates that the current command is latched in. The ena signal can simply be left asserted until the last command of the transaction has been latched in.

A snippet of user logic code below demonstrates a simple technique for managing transactions with multiple reads and writes. This example implementation counts the busy signal transitions in order to issue commands to the I2C master at the proper time. The state “get_data” does everything necessary to send a write, a read, a second write, and a second read over the I2C bus in a single transaction, such as might be done to retrieve data from multiple registers in a slave device. 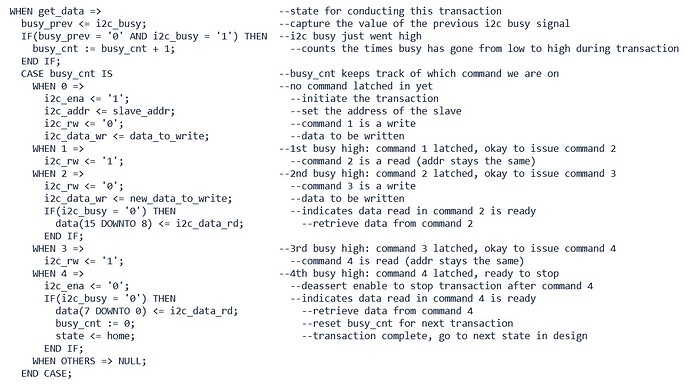 After each transmitted byte, the receiving end of the I2C bus must issue an acknowledge or no-acknowledge signal. If the I2C master receives an incorrect response from the slave, it notifies the user logic by flagging the error on the ack_error port. The I2C master does not automatically attempt to resend the information, so the user logic must decide whether or not to reissue the command and/or take any additional action. The ack_error port is cleared once the next transaction begins.

Section 3.1.9 of the I2C specification defines an optional feature where a slave can hold scl low to essentially pause the transaction. Some slaves are designed to do this if, for instance, they need more time to store received data before continuing. This I2C master component is compatible with slaves that implement this feature. It requires no action by the user logic controlling the I2C master.

This I2C master is a programmable logic component that accommodates communication with I2C slaves via a straightforward parallel interface. It adheres to the NXP I2C specification in regard to single master buses and also incorporates the optional feature of clock stretching.

Compass Pmod Controller (VHDL) - This design uses the I2C Master described above to configure and gather data from a Memsic MMC34160PJ magnetometer.

Humidity and Temperature Sensor Pmod Controller (VHDL) - This design uses the I2C Master above to configure and retrieve temperature and humidity data from a Texas Instruments HDC1080 hygrometer.