Thanks for reviewing my topic! I’ve got an interesting project here. I’m looking to create a private intranet for myself and a small number of other users. It’s dialup based, and arranged around a single host server similar to this diagram. 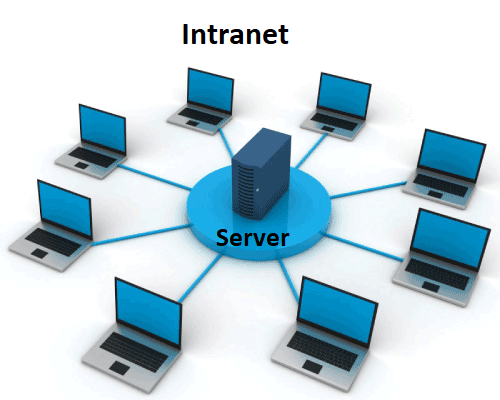 Early on, those blue lines will be Telephone cord and DSL cables using Dialup modem technology. The server is held together via an Avaya IP Office 500 V2. Basicly an in-office telephone system. Indeed, this will handle both telephones and two data lines per person. So one might ask, why not just set up an eithernet?

There’s a good reason for that. Eventually, this will “leave the lab” and the clients will be much further away. We’re talking a mile away at the extremes, even if usually less. That’s too far away to lay cabling lines.

What I need to set up is a tight-beamed Radio system that acts as the bridge between clients and the server location. That’s why I’m going with phone line and DSL speeds. I won’t get faster then that even at the usual “shorter” distances of a mile or slightly below. “One” of the connections covers much greater distances, but that one is between two machines set up specifically to accommodate far lower data rates and much greater lag/latency.

I’m confident I could build the transmitter and receiver racks designed to basically look down each-other’s barrels. So what I most need advisory on is what device handles the bridging via a radio system. Hopefully specifying the exact device that holds this network together helps.

My own came with a mix of different port-types, although that could be their "ideal" purpose. Stuff like data, phone and fax. I'm willing to buy different modules if needed to get the best result. Each client gets one phone line and two data lines. I'll be using dialup modems if/as needed to accomplish the data connections.

Many thanks in advance! This system is still a ways off from completion. The first experiments are just getting it running using physical phone line and DSL covering far shorter distances. The question is if that experimental setup can be turned into the radio bridge system I’ll need later.

Thank you for your inquiry.

I briefly surveyed the manual for the Avaya IP500 V2.

A couple of warnings with this. Digi-Key isn’t going to be able to support interfacing with legacy Avaya systems, but more importantly, I imagine it would be difficult to receive support for this system directly from Avaya when purchasing aftermarket.

That said, looking over that 300+ page manual and all the available add on modules and I’m not getting the impression that system would successfully bridge wirelessly.

Well, it doesn’t have to bridge initially. The first tests are with actual wirings, and the wireless system meant to be a one-to-one bridge for signals across it. Do you have a link to it’s manual so I can review it?

Excellent! I’ll put this PDF to good use! I guess the other question is transmitters and receivers. Making such gear tight-beam would be a matter of building the right antenna and mount. I’ll have to do that myself eventually. I’m not going to worry too much about encryption for the short range variants. Only the long range is important it be encrypted. So for the initial experiments, would any of Digi-Key’s RF catalogue do?

P.S. I like how the manual described the modules, what they do and are meant to handle. That helps a lot in determining what to look for, so thanks!

There is a useful post on Anrennas on this link:

There are also posts on the transmitters and receivers on this link : Search results for 'rf transmitter' - Engineering and Component Solution Forum - TechForum │ Digi-Key

I did not narrow down either search . This should help on the selection.

That is all the information I require. You have all been outstanding, thank you so much! It sounds like I need to think “specialized/encrypted” for only the long range gear. I.E. the one that’s going to cover multiple miles. That’s only one such link, and the remainder are DIY projects similar to some of the projects linked by Verna_1353. I’ll be able to make good use of all this, and equal thanks to Kristof_2649 for the documentation to sort out which modules I need.

The forums directed me to projects like this. It sounds like such a DIY set will work fine for the short range version where encryption isn’t a concern. Add a tight-beam antenna/receiver, and it should work fine!