Need a Potentiometer that can work with reversing polarity

What type of pot can do this? Can you give me a few Digikey PNs I could get?

That’s the description of alternating current, most potentiometers can be used with either AC or DC current.

Alternating current (AC) is an electric current which periodically reverses direction and changes its magnitude continuously with time in contrast to direct current (DC) which flows only in one direction. Alternating current is the form in which electric power is delivered to businesses and residences, and it is the form of electrical energy that consumers typically use when they plug kitchen appliances, televisions, fans and electric lamps into a wall socket. A common source of DC power is a bat...

A potentiometer is a three-terminal resistor with a sliding or rotating contact that forms an adjustable voltage divider. If only two terminals are used, one end and the wiper, it acts as a variable resistor or rheostat. The measuring instrument called a potentiometer is essentially a voltage divider used for measuring electric potential (voltage); the component is an implementation of the same principle, hence its name. Potentiometers are commonly used to control electrical devices such as vol...

A potentiometer is NOT capable of providing that function. The output magnitude vs. shaft position does not reverse when the polarity reverses.

No, this is NOT for AC, I understand the difference.

It will be used on Pulsers for calibrating Geiger Counters. Some Geiger Counters use a + pulse to the Geiger-Muller tube, some use a - pulse. Our unit has a feature of producing a + & - pulse, selected with a Reverse Polarity Switching DPDT Switch. There is a piezo speaker that produces the typical geiger “click”, and the pot will be used to modulate volume, as at higher pulses it produces a high pitch buzz that needs to have the volume reduced.

Any thoughts on how we can uses a pot for this, when the DC voltage is + and -?

This details the DPDT hook-up.

With a potentiometer connected in voltage divider mode (Vin on one end, Vground on other end, and Vout on center wiper pin), Vout will be a percentage of the input voltage, regardless of whether Vin is positive or negative. See the following diagram (found on the Sparkfun website): 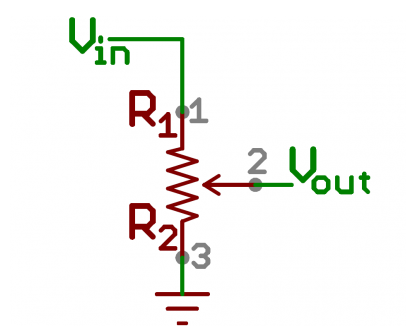 I tried this setup. We get the clicking and associated light flashing with Vin to Vout, but when polarity is reversed, there is no clicking nor flashing.

So you are saying that the pot should work when the current reverses flow? if current flow starts in the direction of Vin to Vout, which works, then changes direction flowing from Vout to Vin, it should flow in this direction?

The speaker works in both polarities, but when the Pot is added, it only clicks in one polarity

I’m not clear on how this pot fits into the circuit. Is the pot used to control the voltage seen down stream of it (which would use all three terminals) or the current passed down stream from the pot (in which case you would wire to only two of the three terminals)?

What is connected to the output of the potentiometer?

The Piezo speaker. It produces the typical geiger “click”, and the pot will be used to modulate volume, as at higher pulses it produces a high pitch buzz that needs to have the volume reduced.

We have mini amps that would work to control volume output that would be pot adjusted. These would work with positive and negative input polarity.

I’m not sure off hand regarding counter-clockwise rotation to increase the negative signal, and clockwise to increase positive signal. There is a way to do this of course if that is what you need, but off hand turning the pot would increase volume one way, and decrease volume the other way, similar to a car radio volume knob regardless of the signal polarity.

So can Vout accepting an incoming “signal”? Is what I am asking.

What are some P/Ns? and I’ll order a few to test. Clock/counter-wise varying w/ polarity isn’t an issue.

Thanks for your reply BryanEStone.

12V @ 1A is 12watts, so a potentiometer with higher wattage may work when using only two of the prongs in a series configuration. Just remember when a 12watt resistor is set in the middle, it can only handle 6watts across the wiper (middle pin) as the power rating will divide depending on the wiper position.

You would have to figure out the resistance value of the load since the pot will be in series with your load. If your load is 1,000 ohms then a 100 ohm potentiometer would only provide 10% reduction. If you choose too large of a potentiometer resistance then not only will the resolution not be great when you turn it, but the power handling will be greatly lowered. As a guess, the load resistance would be around 10-12 ohms based on voltage and current values provided.

Take a look at datasheet of 296-43520-5-ND. Vout will amplify the input signal, which will be adjustable through an external potentiometer such like 51AAD-B24-A15L-ND used as a VDB (voltage divider bias) similar to David’s schematic but will adjust the voltage input into 296-43520-5-ND, which will then be amplified.

As a side note, AGC (auto gain control) circuits are also useful as they will try to ‘normalize’ the volume to be constant when an input signal fluctuates, this however would be more circuitry and design work.

But I still need to know - Can Vout accept an incoming “signal”?, which will be -5mV to -5V DC when the polarity is reversed.

Hello,
Typically Vout is not meant to accept a signal unless it is isolated through some kind of buffer or series diodes to prevent back-feeding, since an output is higher power than a signal and may cause damage to the signal output circuit.

Do you have a schematic or more information on the signals, input, output, and circuit specifications? We would need more specifics on the circuit and the parts used but hopefully this helps.

Did you read all that I said previous to you jumping in? It seems like you didn’t, as I already gave all the details of what I need, and you are asking questions and saying things that has no bearing on my issue… Please read my messages thoroughly and let me know how I can solve this issue. Thanks

If you can change the switch to 4PDT and use the extra two poles to switch the ends of the potentiometer then you’ll get the functionality you desire.

Paul, how would suggest the wiring to do what I need?

Attached is the wiring I have for the DPDT. Thanks

It’s just another power reversal wiring configuration.
The two ends of the potentiometer go to the two extra poles and the “X” wiring across the throws for those poles go to the circuit.

Just saw your email, as I was traveling for a few weeks. How would I wire it? I can’t find anything online.

Thanks for all your help!

Here’s the variation I described with text in a previous message: 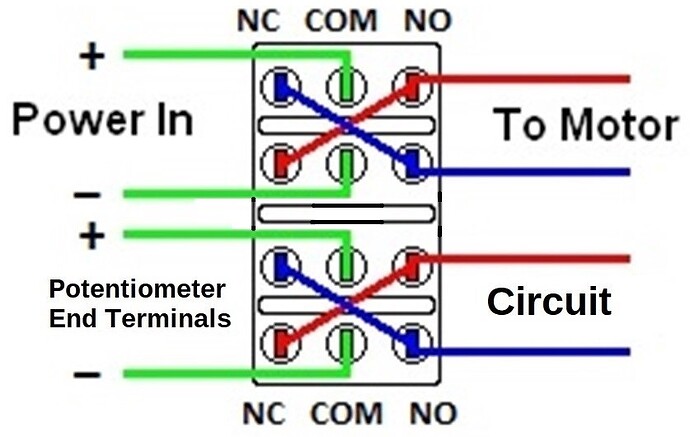 4PDT_polarity_reversing837×531 74 KB
With a polarity reversing switch the source and load positions and/or source polarity connections can be swapped and the circuit operation remains electrically the same, only the mechanical orientation changes. Here’s one of the other electrically equivalent variations: 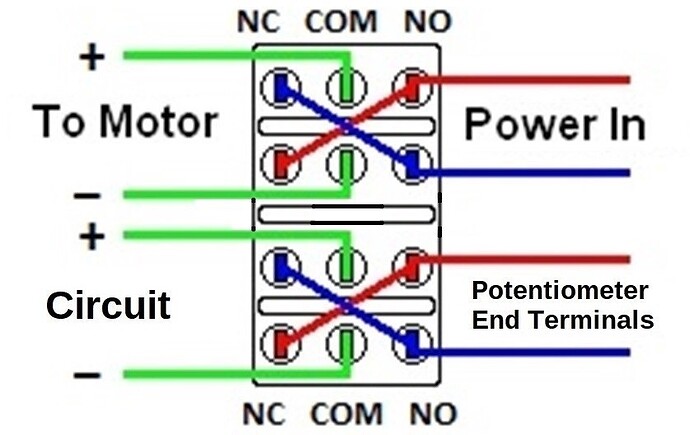 Paul, the images you sent are DPDT, the same ones I sent when we started talking 3 weeks ago.

In a previous message, you said “If you can change the switch to 4PDT and use the extra two poles to switch the ends of the potentiometer then you’ll get the functionality you desire.” How do I wire the 4PDT to reverse polarity on a 4PDT? Can you also explain why this would work, when the DPDT doesn’t?