I have an electrochemical oxygen sensor that outputs a max 13 mv signal and I want to amplify the voltage to read at most 10 volts for a data acquisition system. The sensor outputs 7-13 mv and our system reads 1-10 v. I am assuming the max amplification would be 780x. It’s also important that the system doesn’t add additional unnecessary errors into the new output voltage. What would be a good part to order?

It depends… If you’re looking for something DIN-rail mountable in a convenient, ready-to-eat package, that’s a very different matter than something assembled from component parts.

That said and some assumptions made, a TC7650CPA might be a reasonable choice.

Add yourself a 10K and a 13 ohm resistor in a standard non-inverting configuration, a power supply in the neighborhood of 12V, and you should get an output that spans roughly 5.5 to 10V for a 7~13mV input. You’d lose roughly half the measurement resolution that way, but it takes all of 3 parts and will probably introduce less error than the sensor itself. Adding a capacitor in the 1~10uF range in parallel with the 10K should help if noise pickup proves to be a problem.

I’m willing to get something assembled by parts, but a “ready to eat” package would also work just fine. we like to keep the sum of all internal errors to be less than .01% of the full scale or better. We would use all of these components at 21 c (ambient), we would need to buy a power supply for this, calibration of the system is okay. I am not sure of the output impedance (though I would assume it to be low as the voltage is created by an electrochemical reaction). I would ideally like to use the simplest to set up and work a device package that gets the best results as my knowledge in this area is relatively low.

Thanks for providing an amplifier. For installation and setup, what figure details where and how the resistors and capacitors get wired? is that Figure 3-4?

Simplicity is a somewhat subjective concept…

DEM-OPA-SO-1B would be an example of something that provides analog gain in a package with no assembly required.

On second thought, a OPA187IDR might be a better choice for the DIY route. It could be stuck onto a generic op amp demo board like a DEM-OPA-SO-1B to make something that does the job in a more secure manner than might be had with a device in a DIP package on a breadboard.

Below illustrates the intended connections, less power supply. The figure comes from section 1 of Analog Devices op amp applications handbook, which is a comprehensive resource; there are tutorials aplenty elsewhere that present simplified versions (try “op amp basics” as a search term). Most op amp datasheets focus on the characteristics and peculiarities of a given part, and don’t spell out the more foundational concepts regarding the use of the basic component type. 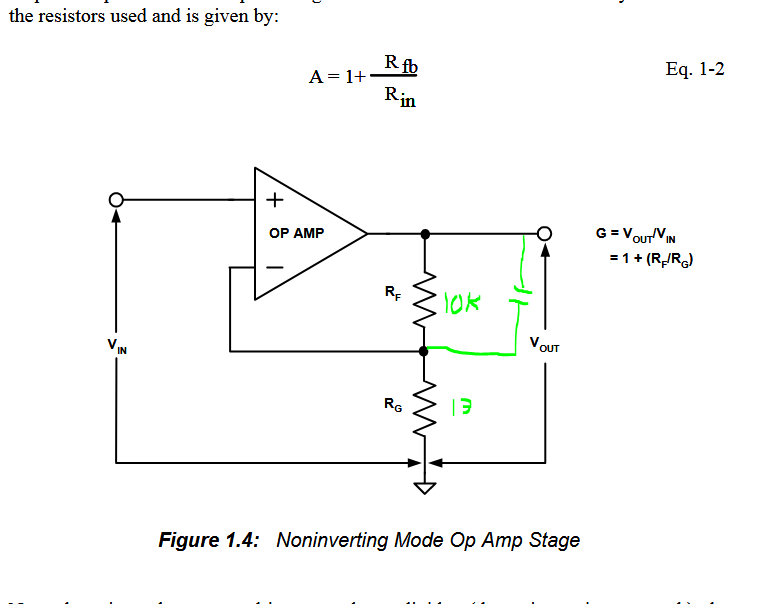 Thank you so much. This has been a huge help!