Hello I am in the early stages of development on a circuit that used a Gas discharge tube. It is a Littelfuse SL1411A090SM. We are populating this SMT GDT onto a circuit board and would like to test to make sure the part is actually there / soldered correctly. Can someone explain to me the proper way for doing this task?

It’s not quite clear what you mean by “test” here; there are automated visual inspection tools available and widely used in the electronics manufacturing industry, as making sure that parts are there and soldered correctly is a concern generally. Not being equipped in that realm however, I can’t speak much beyond that.

If you’re talking about some sort of electrical test/inspection, that’s a bit different. I’d suggest looking at the part’s basic functional specifications and designing a test around those. It’s a crowbar-type device, meaning that to a first approximation, the part behaves as an open circuit until the applied voltage exceeds some limit, at which time the part changes to look like a short circuit, until current flow through it is interrupted by something else.

In reality, there’s a “glow” phase as voltage across the device is increased during which some current begins to flow, and there’s some minimum amount of current that needs to be available to change that “glow” to a full-fledged arc.

For functional test purposes, I’d suggest applying an increasing voltage and watching for current flow as expected at the appropriate voltage points. One would want to be careful to keep the applied test signals within reasonable limits; no point in making more rework for oneself by frying components a missing GDT was meant to protect… 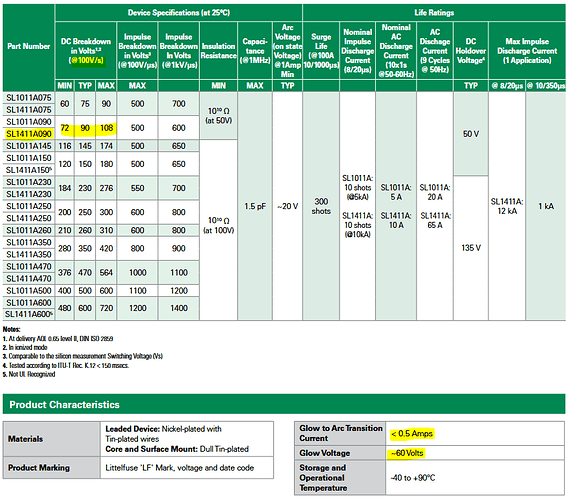 FWIW, I’ll be out of the office for a while beginning shortly, so further responses from me on the topic will be delayed.

Thank you for the response Rick! So I figured out my issue but I will still tell you about my application.

I was testing by applying a voltage higher than the rating with a very small current. I was finding that it would clamp 2x’s and then never work again. So that is why I came here to make sure I was not damaging the component.

After further investigation, I have found that the traces routed to the GDT are too thin to handle the surge in current and break open.

I need to look at the trace layout and make them bigger if possible.

Again, thank you for the reply. Have a great weekend!

After further investigation, I have found that the traces routed to the GDT are too thin to handle the surge in current and break open.

Ah yes, the old copper fuse trick. Much easier to pull that over on oneself when the black streak is hidden under a bunch of plastic…