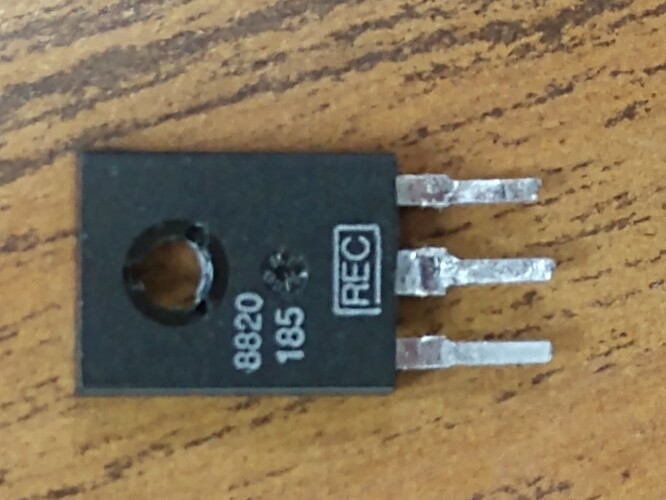 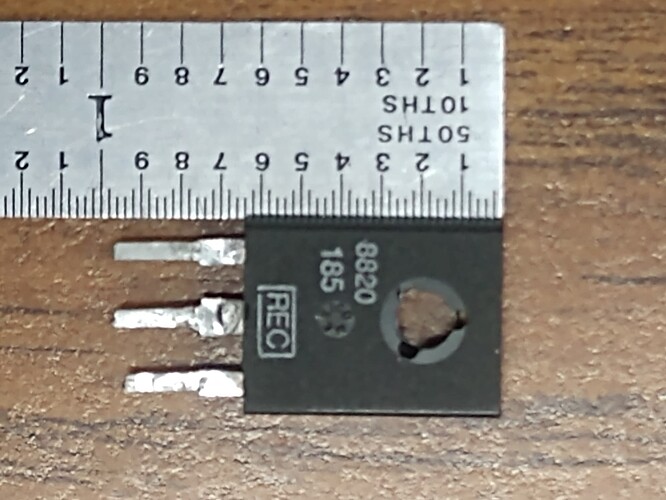 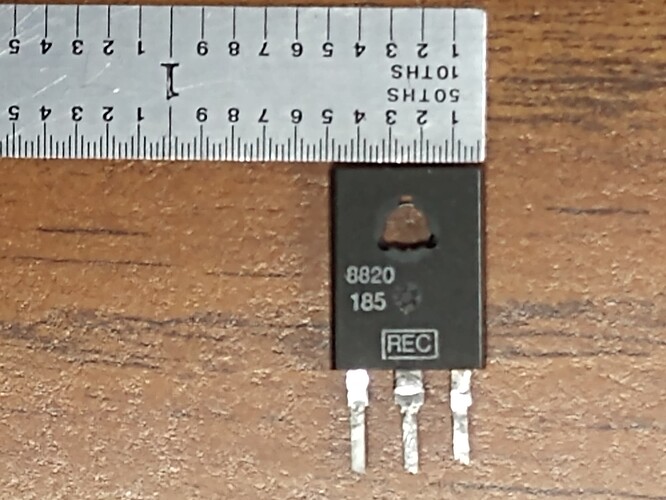 The ID marks are as follows:
8820
185
REC (maybe a logo, the box around REC is incomplete in the lower left hand corner)

I am not able to verify that item or it’s specifications, sorry.

Could you provide a few pictures of the circuit board? I’d like to look into this further.

It is a situation where a former employee left some loose parts around and I am trying to figure out if they are relevant to the projects he was working on. I was hopeful someone might be able to at least identify what I assume is the logo at the bottom.

Sorry, I’d like to help, but I don’t recognize that logo. If I come across it, I will update this post.

I don’t recall who used that that logo, or much else from back then.

Based on your dimensions, it looks like that is a TO-127 package type. Those are rare these days. I couldn’t find anything regarding the “REC” label, so no idea who made it. 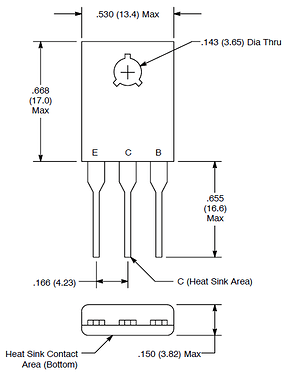 Take the following as a “last resort, way out there” sort of theory, and only consider if you have exhausted all other options and are desperate to try anything. There’s a significant possibility that following it could further damage the thing you are trying to repair.

One of our Marketplace companies, NTE, makes essentially generic components, including semiconductor parts, for the aftermarket, and it’s conceivable that “REC” is another company doing the same. NTE makes a PNP transistor named “NTE185”, but it comes in a much smaller, and much lower power handling TO-126 package. It’s possible that whoever “REC” is made a similar part (from a characteristics standpoint) and labeled it “185” because of its similarity, but put it in a higher power handling TO-127 package.

Assuming the above supposition is true, you might consider trying the NTE183, which also has similar characteristics, but which has a lower maximum voltage of 60V compared to the 80V of the NTE185. If your system always stays considerably below 60V, then this may be a reasonable alternative. Unfortunately, it’s a very pricey item, it ships directly from NTE rather than from us, and there’s a pretty good chance it won’t work and might further damage things.

Assuming everything above is correct, another possibility would be to try the D45VH10G. It also has somewhat similar characteristics to the NTE185, including being rated for 80V. We have in-house stock on this item and it is far less expensive than the NTE183.

A major drawback to this part is that it comes in a TO-220 package, which is somewhat smaller than the TO-127, and the pin spacing is narrower, so you would have to bend the leads to get them to fit into the same holes in the board. Also, because of the different form-factor, you would probably have to modify the heatsinking to make it fit and still dissipate adequate heat. Furthermore, the pin orientation is backwards compared to the NTE185, with the base on pin 1 and emitter on pin 3, so you would have to flip it around 180 degrees compared to the NTE185. This would make heatsinking much more difficult.

Finally, these types of transistors often work as a matched pair, with a PNP and NPN transistor used in a push-pull sort of arrangement. If so, you’ll also want to replace the NPN with the match for the D45VH10G, or else the output signal could be distorted. If your circuit uses a complementary NPN transistor, you should see it near your “185” part. It would most likely have a similar part number, such as “184”. If you need a matching NPN, the match for the D45VH10G is the D44VH10G. The D44VH10G has the same pinout as the D45VH10G, so it would also have to be reversed on the board, as described for the D45VH10G.

Again, to re-emphasize, I would only recommend considering the aforementioned options if you have exhausted every other alternative, and you are willing to try anything to get your board working again. There is a significant likelihood that it could further damage your board.