Hello, this is from a Dell U2414H touch capacitance control board. It has 5 touch buttons on the front, one for power and 4 that are used for OSD controls. Therefore I think it’s a 5 channel chip.

I have searched for the numbers on the chip every way I can imagine and cannot get a surefire identification to then find a data sheet.

I am trying to change from touch controls to physical buttons and this seems to be the biggest piece of the puzzle. 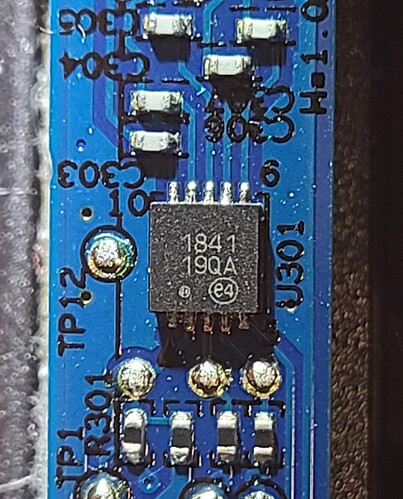 Welcome to the Tech Forum!

After doing a little Googling for that monitor, I can see why you might want to convert it to mechanical buttons. Sounds like lots of people have had troubles with the touch controls on that display. Unfortunately, I can’t find anything on that chip. I would bet it’s a proprietary part either made specifically for Dell, or a part that has been private labeled for them.

Even if the chip were to be identified, it would still be a bit of a challenge to convert, as this chip most likely uses I2C or SPI to communicate, and if so, you would have to replicate the particular serial signals of that chip with an MCU or similar, in order to make it work with push-buttons.

The only thing I could suggest is to try to monitor the signals sent by the chip when it detects a “touch” and then try to replicate those signals with another programmable chip.

Thanks for the reply, I was afraid at Dell’s volume it might not be a off the shelf part. I am just learning about the different capacitance touch sensing scheme. I was able to discover that simply shorting certain debug pads to ground resulted in a button press. However, the behavior is highly erratic due to inference, I guess parasitic capacitance.

The only thing I could suggest is to try to monitor the signals sent by the chip when it detects a “touch” and then try to replicate those signals with another programmable chip.

I was reading though the TI FDC1004Q datasheet and began to research I2C sniffing incase I couldn’t find an actual datasheet for this chip.

Yeah, I considered mentioning the FDC1004, as it appears to have a very similar package, but it only had 4 channels, rather than 5. It still could be a similar part, so it’s a reasonable part to study.

And now that you mention it, the extra channel explains the custom part. There are not many 5 channel chips on Digikey.

This could be Microchip’s CAP1106.

It appears that judtinkerer’s package has external leads, but I could be wrong. If I’m wrong, then you may well have found it, or possibly Microchip made a special leaded package for Dell (or Dell’s subcontractor). Either way, thanks for pointing that one out.

Looking at the first page of the datasheet for the CAP1106, it does seem like a likely candidate. 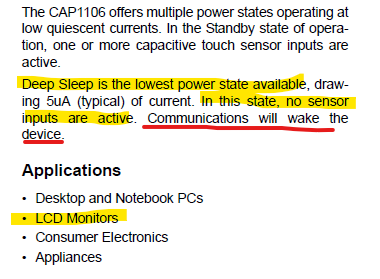 Based on what it states, if this is the right part, I could see how software issues not related to the chip itself might cause problems, as it states that if it goes into “Deep Sleep” mode, it will only wake when an external device communicates with it. If the external device (in the monitor or possibly the PC) doesn’t do so, it could render the touch interface non-functional until communication resumes (possibly from a re-start).

Thanks @heke and @David_1528 I added another image of the package since I was sitting next to it.

I did some more probing last night and @heke might me right. Here is what I have found.

Unfortunately, after reading through the datasheet a bit, I think it would be really challenging to convert to mechanical switches because there are a lot of variables to account for. You would have to know how the chip is configured and controlled (these are programming choices by the display designer). The interrupt and sleep behavior would be particularly challenging.