I am looking for a replacement LED for a 12V low voltage flood light. The LED measures approximately 3.4 x 3.4 cm and contains 7 LEDs. Pictures of front/back are attached. Can you direct me to a replacement for this?
Thanks,
Andy 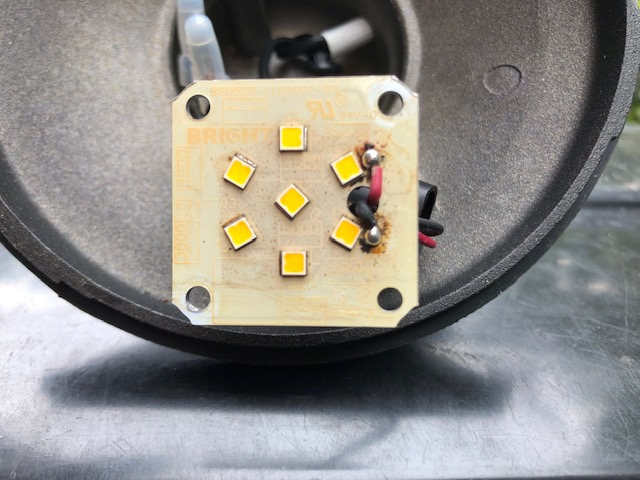 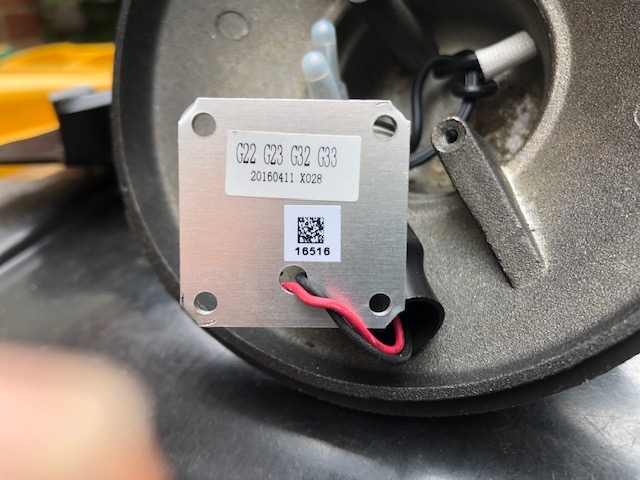 There looks to be some markings along the edge of the front of that item.
Would you have any more luck deciphering what they would be with it in hand?
Also does the LED module see the 12v? If so do the wires attach to a LED driver?
Would you be able to indicate what the output current would be for that driver?

Top edge: BG0509-116A007-03
Below this is the number 2700 outlined in a rectange (perhaps this is the lumens output I would think?). Most of these lights I have used are rated in the 2700-4000 lumens range. To the right of this just underneath the trademark symbol is 9.4 V - 0. I cannot make out the decimal but would think this has to be 9.4 and not 94. I will try the hook up this light and measure the real output to the LED with my Fluke meter.
Thanks for your help in this.
Andy

That’s a handful of discrete LEDs soldered to an MCPCB (Metal Clad Printed Circuit Board). Whether or not the manufacturer purchased the assembly as such or had it fabricated as a custom item is unknown to me, but I think it unlikely that we would have a direct replacement. Any such item or workable alternative we’d have available though, would be found here.

Further disassembly to be able to read driver specifications off the device label would be advisable, as it’s difficult to get usable measurements using a multimeter. (They appear as short circuits to the typical constant-current LED driver, causing protection mechanisms to activate.) With driver specs known, one could then select an emitter to match, or potentially replace both driver and emitter with a pair of one’s choosing that’ll fit. Replacing the discrete LEDs on the MCPCB is also a potential option.

My recommendation for most persons however, would be to simply replace the entire fixture.

I don’t have any info on a replacement part, but I can offer some insight on part of what you noted as being printed on the board. Specifically, the 94v-0 marking. This is from site: https://blog.flexaust.com/blog/what-is-ul94v-0

" UL-94 is the Standard for Tests for Flammability of Plastic Materials for Parts in Devices and Appliances. Within this standard, materials are subjected to various burning tests to see their performance in flammable conditions. Flammability UL 94 V method “evaluates both the burning and afterglow times after repeated flame application and dripping of the burning test specimen” in a vertical burning test.

To attain the UL 94V-0 standard, samples must have met the following criteria:

Not sure if this helps you much, but it’s knowledge for future reference.

I have two pictures of the LED driver that is associated with the multiple LEDs on the MCPCB. I am wondering if the pictures/numbers on the driver help. Do you need to have the heat shrik covering removed? Would you be able to suggest a replacement (single LED) to work in this system? 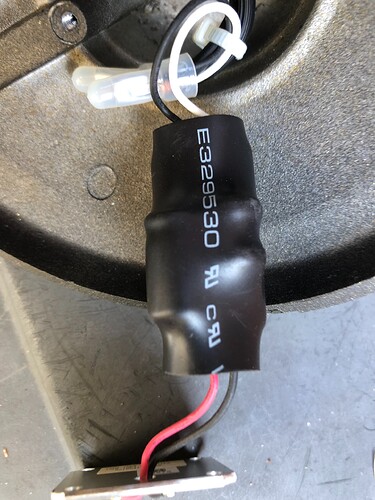 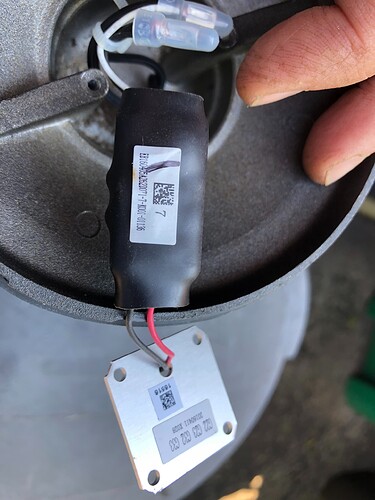 The number on the label on the side of the driver is a little hard to make out but that isn’t coming up anywhere for me.

The other option if you have a multimeter would be to test the voltage on a working LED fixture if you have one and then break the circuit and test the current in series going to the LED module.