I am looking for a replacement SMT LEDs that goes into a outside lighting fixture for our local school. I need white light, bright as can be. When power is on without a load there 56 volts being supplied. When the LED board is hooked up the it pulls the power supply to 36 volts.

Do you have photos of the Surface Mount LED you are trying to replace? Are there any part markings as well? There are multiple factors at play when finding a replacement SMT LED such as Package/Case size which is the physical dimensions of the part as well as other attributes such as color and brightness rating.

No markings visible. The LEDs are approximately 3mm x 3.5mm. I attached a photo of the LEDs and one of the entire board. This board has the metal backing with heatsink compound. As for color and brightness, does not need to be exact. Basically need super bright light as this is mounted to a 35 ft light pole. 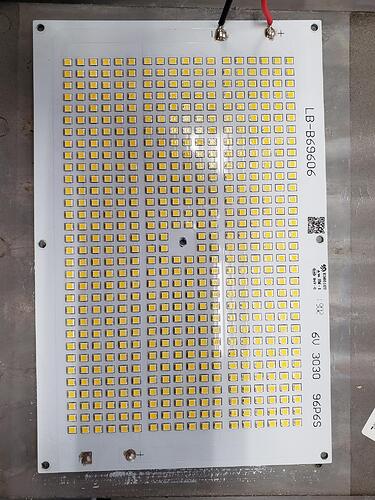 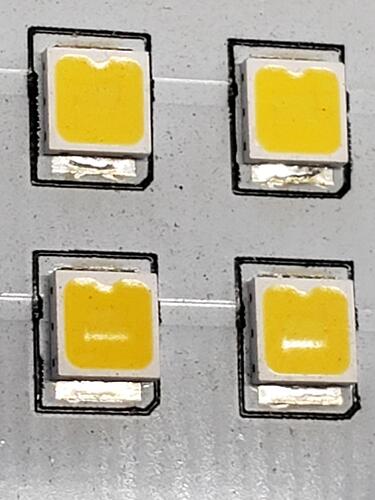 Please note that the thermally conductive nature of the metal PCB makes rework of such boards quite inconvenient; success using the typical soldering iron is unlikely. Further, if individual emitters in the array have begun to fail, it’s likely that others are well on their way to doing likewise and the stress of bringing the board up to a temperature that will facilitate replacement of a handful of emitters will only accelerate the process. Assuming that repair attempts are initially successful, it’s likely that you’d be repeating the process in a short period of time.

My recommendation would be to contact the fixture manufacturer for a replacement emitter array, or to replace the fixture entirely.

Thank you for your response. That was what I was looking for, a part number.

I understand and fluent in the rework requirements. I intend to replace them all. It won’t be much fun but doable.

FYI, I did reach out the manufacturer, they was not so helpful.

This light is for our local public school. We’re always looking to save a buck.