The Golden Rule of Board Layout for Switch-Mode Power Supplies

The Golden Rule of Board Layout for Switch-Mode Power Supplies

This article explains the basis for achieving an optimized board layout, a
critical aspect in the design of switch-mode power supplies. A good layout
ensures stable functioning of the switching regulator and minimizes radiated
interference as well as conducted Electro-Magnetic Interference (EMI).
This is widely known by electronics developers. However, what is not generally
known is how an optimized board layout for a switch-mode power supply should look. 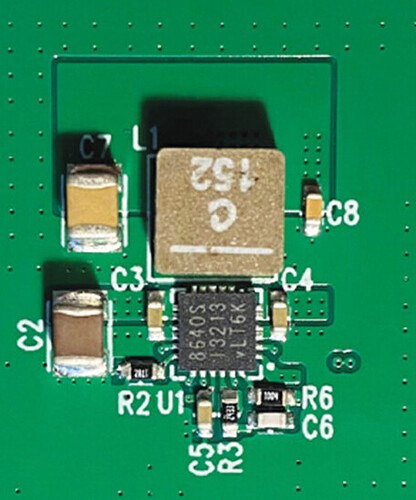 Figure 1. The board of an LT8640S switching regulator with closely spaced components and
thus a compact board layout.

Figure 1 shows the circuit of DC2530A an LT8640S based evaluation board.

It is a step-down (buck) switching regulator that can tolerate input voltages of up to
42 V and is designed for output currents of up to 6 A.
All components have been placed very compactly.
Placing the components as closely together as possible on the board is a general
recommendation. While this statement is not false, it is also not particularly
suitable if the goal is to obtain an optimized board layout. In Figure 1, there are
quite a few (11) passive components surrounding the switching regulator IC.
Which of these passive components have priority over the others in the
placement and why?
In a switching regulator PCB design, the most important rule is to route the traces
that carry high switched currents to be as short as possible. If this rule is successfully
implemented, a large part of the board layout for a switching regulator
will be addressed properly.

Figure 2. A schematic of a step-down switching regulator and paths with rapidly changing
currents shown in red.

What is the easiest way to implement this golden rule in the board layout?
The first step is to find out which paths in a switching regulator topology are
critical. In these paths, the current flow changes with the switch transitions.
Figure 2 shows a typical circuit for a step-down converter (buck topology).
The critical paths are shown in red. They are connecting lines in which either the
full current or no current flows, depending on the states of the power switches.
These paths should be as short as possible. For a buck converter, the input
capacitor should be situated as close as possible to the VIN pin and GND pin of the
switching regulator IC.

Figure 3. A schematic of a step-up switching regulator and paths with rapidly changing
currents shown in red.

Inexperienced circuit designers often consider the board layout for a switching
regulator to be black magic. The most important rule is to design the traces,
in which the current flow changes with the switch transitions, to be as short
and compact as possible. This can be explained easily, follows logical relationships,
and is the basis for an optimized board layout in a switch-mode power
supply design.

Frederik Dostal is a power management expert with more than 20 years
of experience in this industry. After his studies of microelectronics at
the University of Erlangen, Germany, he joined National Semiconductor
in 2001, where he worked as a field applications engineer, gaining a lot
of experience in implementing power management solutions in customer
projects. During his time at National, he also spent four years in Phoenix,
Arizona (USA), working on switch mode power supplies as an applications
engineer. In 2009, he joined Analog Devices, where since then he held
a variety of positions working for the product line and European technical
support, and currently brings in his broad design and application knowledge
as a power management expert. Frederik works in the ADI office in
Munich, Germany.