Can you help identify this component? 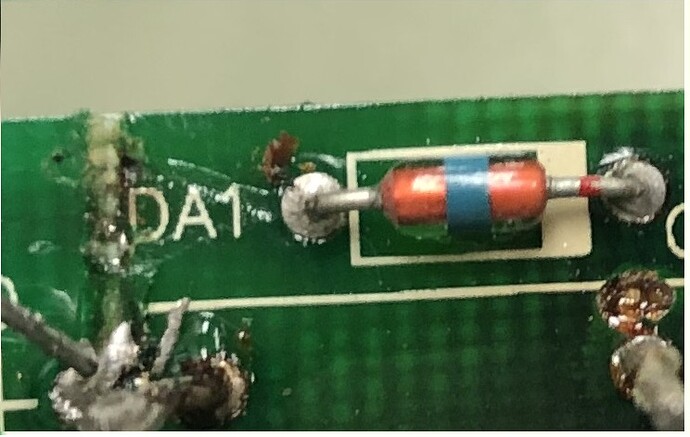 The end manufacture for the product maybe able to help you identify the exact part. I would suggest to contact them to repair your board. My guess it is a diode.

No, the manufacturer won’t help me with this, i already tried. Does the color orange body with a blue stripe mean anything?

no the marking as that has nothing to id it . so did they offer to sell you a new board ? if not then you are left with guessing in my experience. have you tested the diode to see if it is still operating ?

I should say the strip looks more a how a manufactures marks their parts and for that I can not find any source to help id the part.

It’s a specialized board for equipment that is no longer supported by the vendor, and we can’t find these boards anywhere for purchase.
I did solder the component out of the board and it measures O.L. on both Ohms and in diode check on my fluke meter. it reads 0.4nF capacitance. I thought it may be a thermal device of some kind, so i applied heat and cold to it, but the resistance never changed.

Diode or similar seems to be likely given the package and “D” portion of the reference designator. Bi-directional TVS diodes and diacs alike will tend to show up as open loop both directions on multimeters, since the test voltage they apply generally isn’t sufficient to cause reverse conduction. Being symmetrical devices, neither really has much need for a polarity mark.

Doing a bit of reverse-engineering to study how the part’s being used may offer some additional clues. If that seems to support the TVS/DIAC theory, careful application of voltage in series with a resistor of sufficient value to limit current flow to perhaps ~500uA could help better identify the I-V characteristic and point to possible replacements.

The red stripe on the lead could be a cathode lead identifier. Usually small glass body diodes are low power and often oddly marked ones are esoteric high frequency RF diodes.

What type of equipment is it from?
What part of the circuit is it in?

This component in question is in series with an optocoupler, it’s item DA1 in the diagram that i made. I came up with this diagram after tracing out the power supply circuit section of the board, if i got it accurate. The output from RF73 and RF74 goes across an isolation to power the rest of the board. The board is supplied with a DC power supply measured 678V. 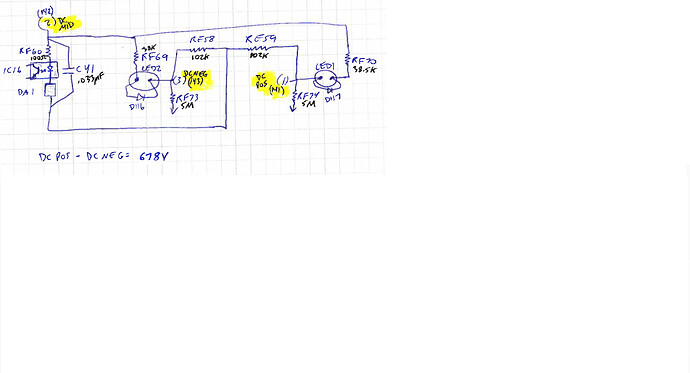 Well, I applied DC to it with a 1k series resistor, and an ammeter, slowly increasing voltage. There was nothing until at around 34V it started to conduct at 4uA. i increased voltage a little more but the current dropped again. I tried this same test with the leads reversed, but it never worked again, got no current through it for any other tests. So if it was still functioning i must have destroyed it during the test.

In the circuit, it’s in series with the LED of the P620 optocoupler, any idea what it could have been used for? there was also a current limiting resistor there so i can’t think of what it’s purpose was?

The soldermask and red mark do seem to imply some sense of directionality; how would this appear on the sketch? The diodes in most optoisolators don’t have much of a reverse voltage rating, so a plain 'ol rectifier to avoid damage due to reverse bias could be a possibility.

The function of the circuit and its intended operation aren’t clear to me at this point; from what’s shown it would appear that the opto is connected across the midpoints of what amounts to two voltage dividers, the purpose of which isn’t all that obvious. Tracing out the circuit a bit more might offer some further clues.

In what direction was the DC applied during the mentioned test?

The optoisolator is labeled as P620, i looked up and found a datasheet for TLP620, if its the same as this one, then it’s LED is bidirectional. I put that on the drawing, and i added the red stripe on the item we’re looking for, then i added some more details on the other circuitry on the board that i was able to trace out. 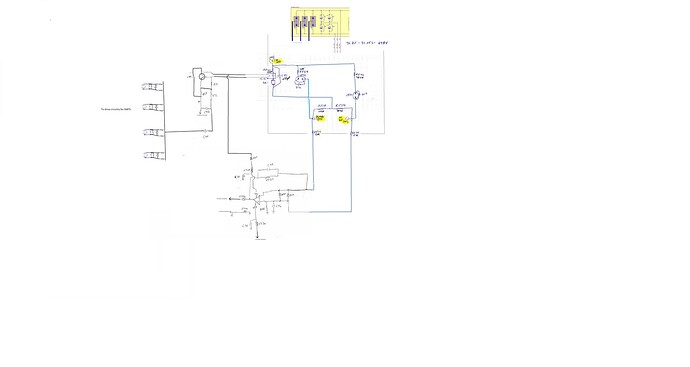 MAZ2000_Series_Rev_Feb_2002.pdf (85.5 KB)
What about this datasheet (attached).
It’s a zener diode and it has the color band off to the side of the lead, but it doesn’t say what color the body is, or what the other bands would be. Do you think this could be close to what we’re looking for?

One source appears to suggest that a single blue band may signify a zener diode. If I’m reading your diagram correctly, it would seem that the opto is used to monitor the voltage present at the midpoint of two series-connected 'lytics filtering rectified 480, relative to a voltage divider across the rectified supply; that’d suggest to me some sort of balancing or health monitoring use, or perhaps an apparatus to derive a low-voltage supply. Doesn’t really help ID the value of zener though, if that’s what it is.

With that bi-directional opto-coupler it seems strange any unidirectional diode would be in series since that would effectively make it functionally equivalent of a less expensive unidirectional opt-coupler. Adding a part to increase cost is not a trait of good engineering design.

I should have done this simple Google search before, diode red band on lead blue band on body

The second result from Reddit has at least part of the solution:

r/AskElectronics - What is this red diode with a blue band in the Middle and a... 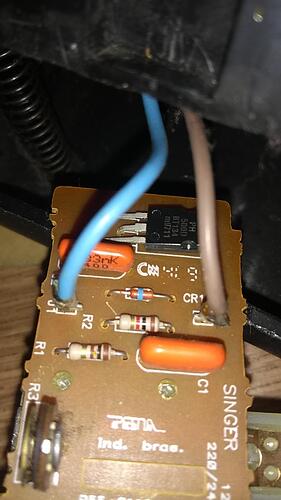 A diac makes a lot of sense for the circuit, it will adjust the duty cycle of the resulting waveform. Of course that leaves the question of what voltage diac it is?

Thanks Paul, agreed it appears to be a diac. I also found another link that also seems to show that it would be a diac: Have You Seen A Diac Before? | Electronics Repair And Technology News (jestineyong.com)

As to the value, when i was testing i know it seemed to turn on somewhere between 20 and 50V, before it failed completely and i wasn’t able to test anymore. I think i’ll try a DB3 or DB4 Diac in place and see if the circuit works. I’ll let you know. Thanks for your help.