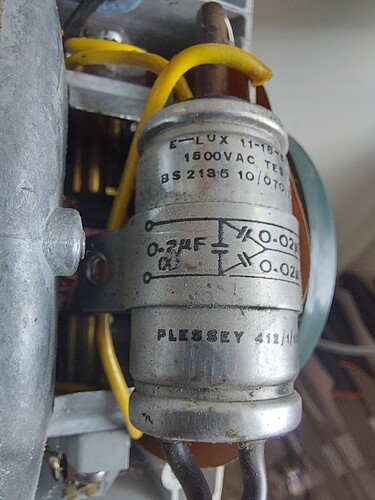 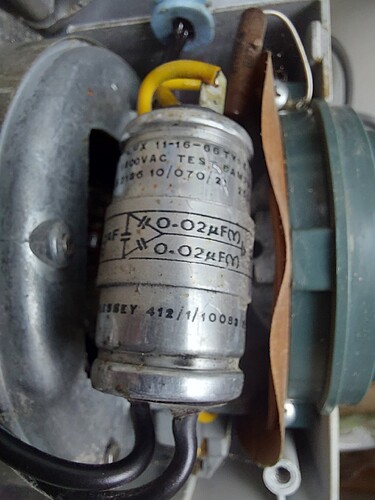 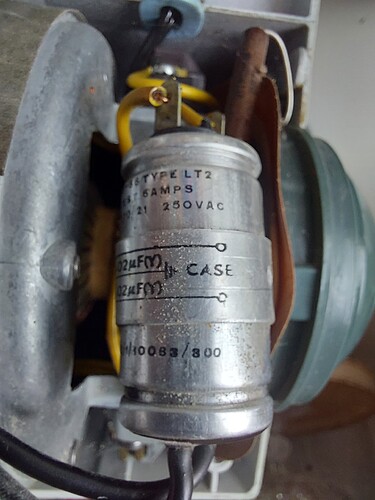 Mom found a kitchen machine in storage from 1970, worked like a charm, until the smoke came out.
Any replacements for this?

Hi @vetbjorn, welcome to the forum! It looks like this is a capacitor bank rather than an individual capacitor. The schematic on the side seems to indicate there are three 0.02uF capacitors inside, wired in a delta formation. Though we do have individual 0.02uF capacitors, unfortunately I didn’t see any units available to replace the one you have there. It is possible that a third party dealer or repair specialist will have something to help.

That would appear to be a filter cap array made by/for electrolux circa 1966. The internal schematic seems to be printed directly on the can; conductors passing straight through with a 0.2uF X-rated capacitor across the line, and 20nF Y-rated devices between each lead to ground (the metal case).

Such a thing was likely used because many small appliances use(d) universal motors, which are brush-commutated and quite effective at generating electrical noise. Fair chance that splicing input to output directly would restore function, though there’s a likelihood of causing harmful interference (e.g. cellular and wifi don’t work for a 2-block radius) in so doing.

I expect that finding a drop-in replacement that’s not similarly old and vulnerable may be difficult. There are however some X and Y caps of similar values available as discrete parts, which might be used to assemble something functionally similar.

Hey, thanks for detalied replies, will try to bypass it next time i’m visiting.
Wanted to fix it, but i don’t know about brewing up my own capasitator.