I need technical support to for a Datawave Wireless Bridge (WB-RS485-24LP-A) that I set to factory defaults and can no longer access using the XCTU software that is used to configure the device. I can still access it using Putty, but the commands are very limited compared to the XCTU configuration software.

Hi @steve.gardner , that is very strange, since you can access it thru Putty… I’d first try selecting the “select-all” option under the “Discover Radio Devices” window in XCTU and running the scan with that. 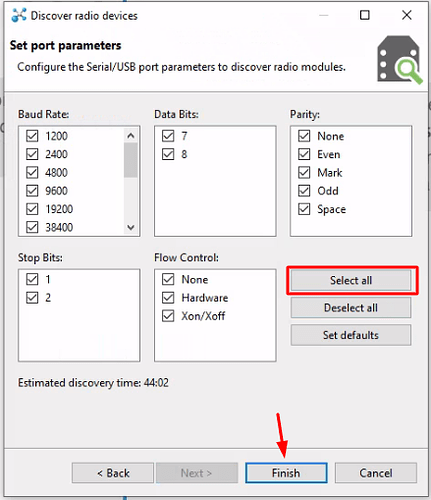 I tried your suggestion of selecting all. It did not work. I tried to post screen shot below of my connections to the devices, but the emails kept coming back as undeliverable. I can still use XCTU to access one device, but not the other (the one with factory defaults). I can still use the putty connection to the one with the default settings and 9600 baud. I do change the baud rate in XCTU between 9600 and 38400 depending on which one I am trying to connect to. I successfully change the baud rate on the one that is talking to 38400 to match the BAS.

Thanks for your help,

If you’re not able to post a photo once you open the Reply window, you could send the photo(s) to applications.engineering@digikey.com , and add a note requesting us to incorporate those into the forum thread or at least forward them to anyone interested. Be sure to add a link to the forum post ( Datawave Wireless Bridge WB-RS485-24LP-A ).

This issue still is not resolved. Do you have any other ideas?

Hi @steve.gardner, I’m really not sure with this device. With the device you have working, can you dump it’s settings in putty and set the un-working device with the exact same parameters? I don’t know why, but for some reason the USB hub used on the Datawave Wireless Bridge is no longer allowing it to talk to the XBee thru XCTU. As a last resort, you may have to physically open the device, remove the Digi XBee and utilize Digi’s USB adapter directly thru XCTU to recover it.

I am ordering a new one. Once I get it would you be able to help me figure out which parameters I can edit in XCTU to make a reliable continuous connection? I am setting these up in the office where there is complete line of site, but the Bacnet MSTP communication was not reliable. The only change I made was the baud rate to 38400 on both bridges initially, but then my device was going on and offline. That led me to tampering with the settings and setting the one back to default settings.