This RJ system (Registered Jacks) have become ubiquitous in telecom and datacom applications since their early inception in the 1960s, which were categorized by the FCC in 1976 into the Registered Jack (RJ) system which standardizes the wiring patterns, signal specifics, and physical construction of the connector itself. 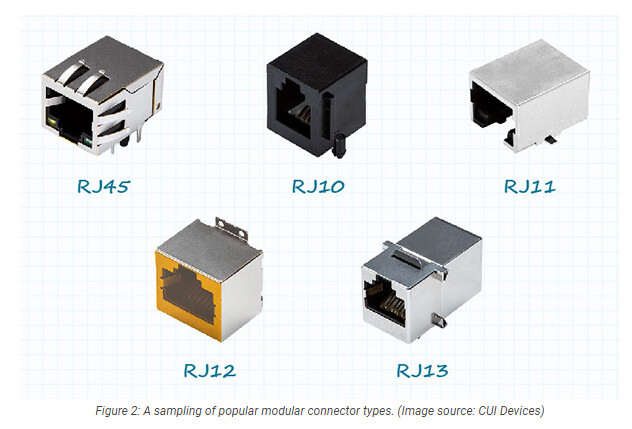 There are a wide variety of application-specific modular connectors. The most common types and their specifications are included here:

Modular connectors may have two, four, six, eight, or ten contact locations, although these positions are not always populated. For example, RJ11 phone connectors usually have four or six connections, while Ethernet (RJ45) connectors have eight (8P8C).

A standard naming scheme defines the connector’s wiring, so that a 6P2C connector has six positions and two contacts, while the 4P4C connector used on phone handset cords has four positions and four contacts. Although most contacts are used for signals, RJ connector contacts can be used to supply low-voltage AC or DC power.

Modular connectors can be specified with additional features such as:

Magnetics can be incorporated into Ethernet designs in one of two ways. The first option is to add a magnetics module to the circuit board between the PHY (Ethernet implementation) chip and the connector jack. Alternatively, an RJ45 connector with integrated magnetics in the housing can be used.

Modules tend to be less expensive than integrated devices and offer better electrostatic discharge (ESD) protection. RJ45 connectors with integrated magnetics offer better EMI shielding and more reliable connections. Both strategies have advantages and disadvantages, but magnetics must be considered if you are adding wired Ethernet into a design because they are part of the Ethernet specification for 10/100/1000 Base-T networks. 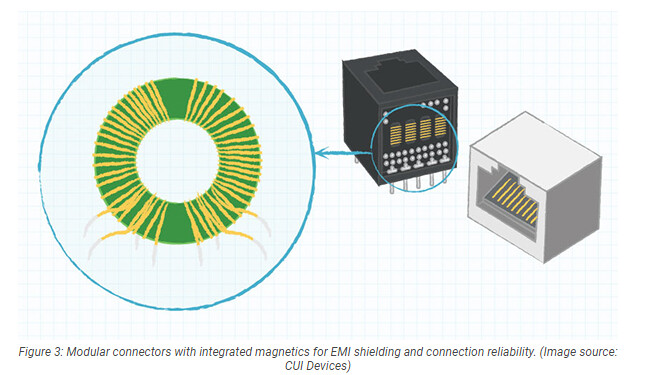 Power Over Ethernet (PoE) and RJ45

An RJ45 is one type of an 8P8C connector. You can plug 8P8C connectors into RJ45 sockets, but you cannot do the reverse as true RJ45 connectors include a tab that only allows insertion of the device in one orientation to avoid an improper wiring connection.

Modular connectors like the RJ45 also offer the ability to relay both signals and deliver electrical power to the devices being connected. Power Over Ethernet (PoE) is a technique for supplying dc power to devices over the unused twisted pairs in Ethernet cables, eliminating the need for separate power wiring. PoE is governed by IEEE standard 802.3af and subsequent versions that have raised the power delivery. The various versions are:

image842×310 20.3 KB
The usage of PoE has grown rapidly due to cost savings based on no need for separate electrical cables, outlets, or installation fees. It also offers flexibility since devices do not need to be located near electric outlets. It is also designed to be safe, reliable, and scalable.

There are two RJ45 pinout standards, T568A and T568B. These define the organization of the eight wires in the connector and each has its own color scheme which must be followed. The T568A standard offers backward compatibility with older wiring. The T568B standard offers better signal isolation and noise protection. Either will work in an Ethernet network. 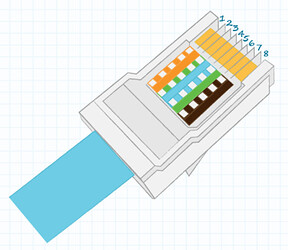