What resistor is this?

I believe I have a 39k ohm +/- 10% resistor here just trying to figure out wattage. Any thoughts? 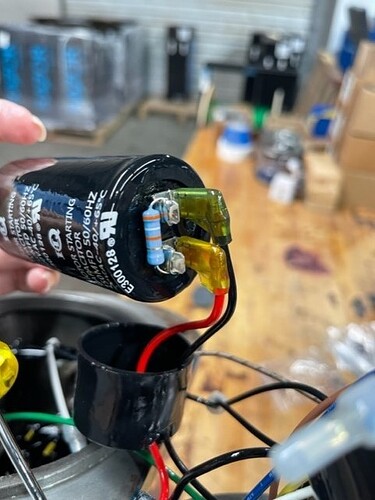 That’d be a bleeder resistor to prevent a charge from sticking around and surprising somebody unsuspecting. Assuming it’s a 120V appliance, V^2/R=0.37, so a half-watt resistor at the very least, likely higher. One can’t really judge by size however, as different types come in widely varying sizes. ROX3SJ39K might be a good option, with some other options here.

Thanks, Rick. Yes this is a bleeder resistor on a start cap for a sewage grinder pump. It’s a 2hp 208/230v motor with 17.5/15FLA.
Is it critical to match wattage exactly?

Is it critical to match wattage exactly?

Nope. Resistor power ratings generally indicate the amount of power that will cause a resistor to reach its maximum permissible temperature when operated in a room-temperature environment, so one generally wants to back off of that by a good bit.

At 240V 39K burns a watt & a half, so I might suggest ROX5SSJ39K instead to be comfortable. Seeing as how it’s not something that runs continuously a 2 or 3W part would probably work, but so long as it fits there’s little reason not to give oneself a bit more margin.

Excellent, thank you. Last question (I think)… are these available with 3/16" female spade connectors preinstalled? We can solder here but to send out to distributors they’d much rather be able to just slide them on the caps. Of course that would get them to buy the replacement caps from us too I guess…but that’s above my pay grade.

are these available with 3/16" female spade connectors preinstalled?

Not as a general matter–it’s not a frequent enough use case for the product.

The typical crimp-on connector (“quick connect” in digi-speak, “spade” would get you something else) won’t hold reliably to a solid wire without soldering, so it’d be a bit of a kludge anyhow.

Well that answers that then. Thanks again, Rick - very helpful and educational.