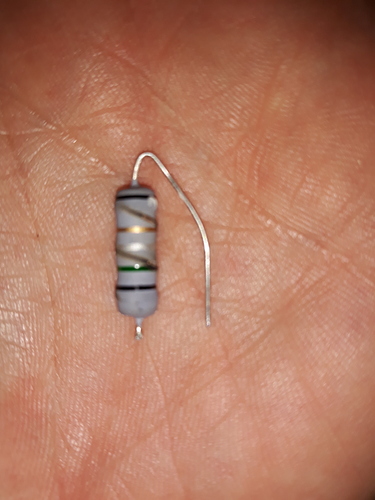 This forum thread (“When Your 5 Band Resistor Isn’t a 5 Band Resistor”) may have some answers for you. According to this, ignoring the fifth black band at the top, your depicted part would be a 0.65-ohm resistor, in the range often used by current sense or feedback loop parts. Do you know what this resistor’s purpose in your circuit is, by chance?

I would also note that you should not always trust the color of a burnt resistor. Looking at the marks your resistor got very hot and when this happens it can affect the pigment in the paint used to color these resistors. It may be possible that this is not a black green silver gold, and instead the black may have been another color that got very hot. Just a thought! 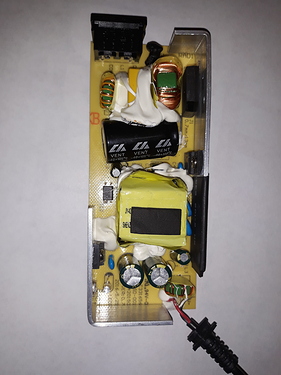 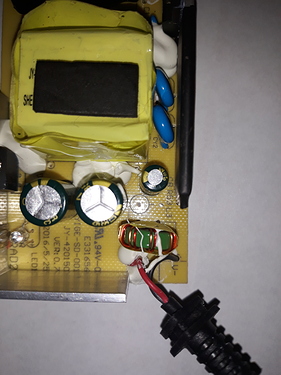 Hm. That looks a bit like the Stay Puft Marshmallow Man sneezed on your circuit board. Was the white goo present before the board blew, or is that fallout from something else on the board dying? I’m wondering if the resistor dying isn’t a result of damage induced by that goo either shorting or opening something that shouldn’t have been shorted or opened. Unfortunately the images don’t tell me much about what your resistor might be at this time beyond hazy maybe-ideas. Hmm. Any notion, Robert?

The white substance is standard. Was there originally. The resistor fits between the three caps in picture. Thanks

Is it possibly a wirebound fused resistor?

Maybe we can start with a measurement on the resistor and try to see if we can determine a wattage. Also do you have a part number or model number on the charger. Maybe it is possible to locate a schematic. - Robert

I will get back to you later with the model number of charger as i am out at moment. Thank you all for your input. 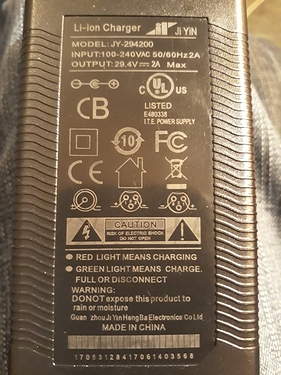 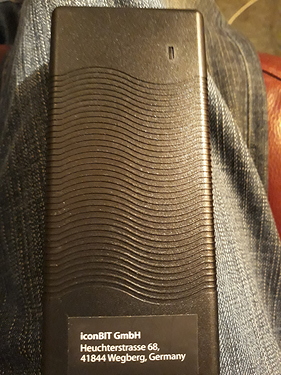 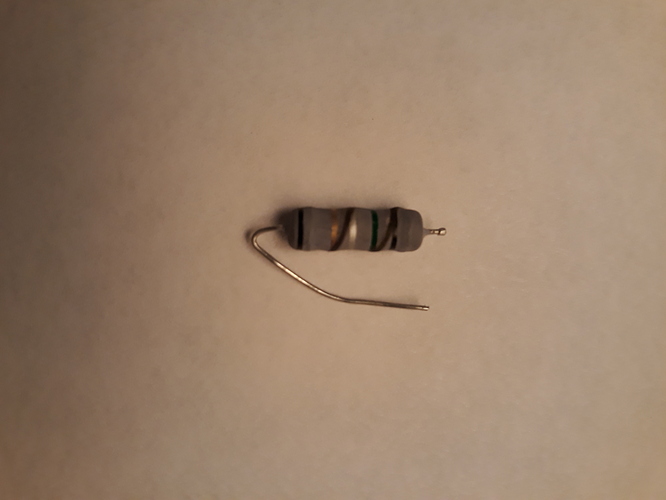 Also, the resistor is open circuit as it is blown, so i can’t give you a measurment reading. 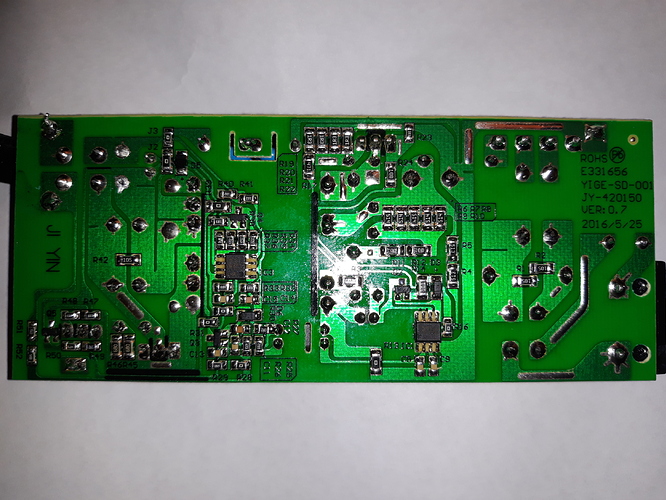 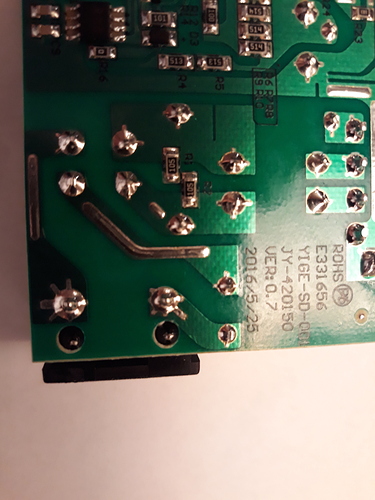 If I was trouble shooting this. At this point I would start working on a drawing. I would identify which components are attached to each end of the resistor so I could try to identify additional failures. Resistors are relatively cheap but shipping costs could make this a losing adventure if you have to place multiple orders.

note in the first picture of the foil side of the board the traces in the upper right look discolored if this is true I would also concentrate on this part of the circuit. 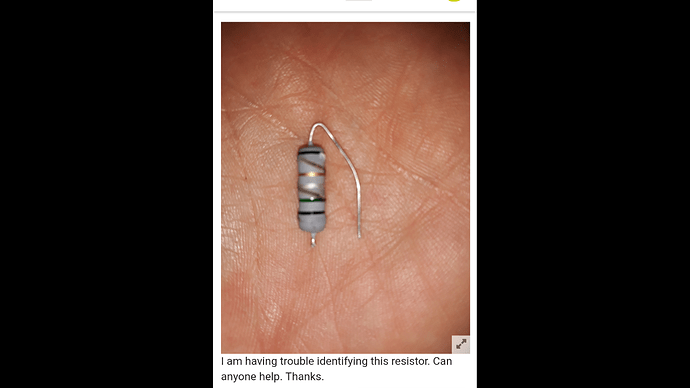 With the information available, it’s difficult to know exactly what type of part this is. I did a bit of checking to see if it could be an inductor, as well - potentially part of a filter with the capacitors it’s near, as occasionally I’ve seen inductors in this type of package which are often misidentified as resistors - but the color banding doesn’t look to check out. Apologies. My best guess at this point remains a low-value current sense or feedback part, with the caveat Robert noted of overheated resistors sometimes altering their color banding.

I just pulled this resistor into the lab and gave it a bit too much power. Now mine is over the top, however you can see the red line is now brown and the blue line looks black. So even though your is not as bad it is hard to say there was not a color change such as I have below. 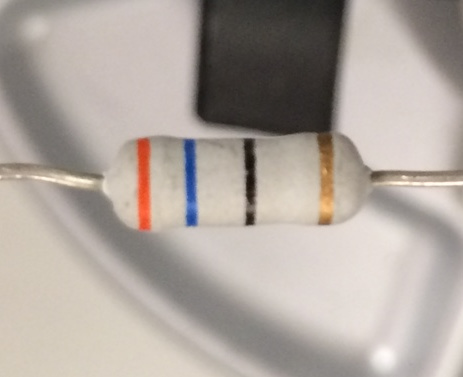 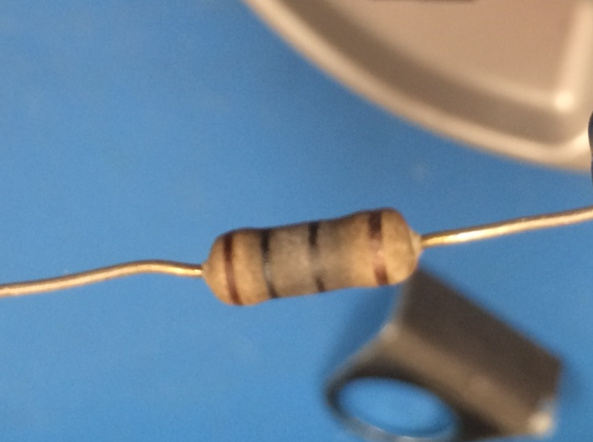 I see what you mean, but mine hasn’t quite gone that far. I’m still at a loss as to which resistor to order. I’ve checked the voltages at the caps when charger is plugged into mains and all show correct voltages. But there is no 29 volt secondary output.

Unfortunately there’s not much in the way of good options for replacing your resistor, sorry Charmed. The part is damaged enough to make identifying it a guessing game, as Robert pointed out.

Brian’s note on the possibility of damage elsewhere on the supply is worth considering as well. You may want to try checking for a new charger rather than trying to repair this one only to find that the board is more badly damaged than it currently appears. I’m not seeing anything in 29.4V output directly, but we do have some options in 28V or 30V, which may work for a battery charge application. Those options can be found here: https://www.digikey.com/short/jv3cbz

Such low values are typicall for current sensing- they drop a small voltage in response to current that is part of a feedback- control circuit.

The burn mark indicates the separation in the helical wrap of the metal film layer. This resistor coating is NOT so badly burned as to make ID difficult, the colors are clearly marked.

Use a metal film resistor, low voltage, flameproof. (this is a safety part)

The white compound is potting compound to prevent the inductors from making noise when excited with the switching frequencies. Many SMPS power supplies operate at switching frequencies at or near audio, and if components, especially inductor windings, are not secure, they can vibrate and make noise. It is sometimes also used for extra high voltage insulation to reduce leakage across the surface of the circuit board.